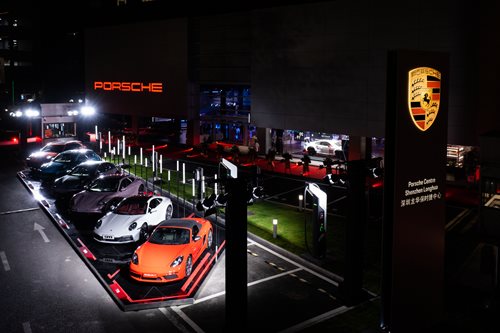 Jebsen Motors celebrates the grand opening of its new Porsche Centre at the Shenzhen’s South China International Automobile Park on the evening of March 31. This is the company’s twelfth Porsche Centre in Greater China and its third in Shenzhen. The opening of this new Porsche Centre serves not only as a significant step in the continued expansion of Jebsen Motors into the South China market, attesting to the great importance it places in this region, but also provides Jebsen’s trademark service experience to more customers in the Guangdong-Hong Kong-Macau Greater Bay Area.

On the opening day, Dr. -Ing Jens Puttfarcken, President and CEO of Porsche China; Mr. Michael Ramsey, Vice President Network Management and Development of Porsche China; Mr. Julian Zhu, Director Region South of Porsche China; Mr. Joachim Eberlein, Managing Director of Jebsen Motors; Mr. Levis Li, General Manager of Porsche Centre Shenzhen Longhua, as well as loyal Porsche customers, Porsche enthusiasts and local media gathered to see the new Porsche Centre in person and to experience the new Panamera in action.
“Thanks to China’s rapid economic development, Porsche’s sales have increased by more than 500 times over the last 20 years.” Said Dr. -Ing Jens Puttfarcken, President and CEO of Porsche China, who offered his congratulations at the grand opening of the new Porsche Centre and shared the tremendous changes of the development of Porsche in the Chinese mainland over the past two decades. “We have known the importance of expanding our dealer network since the first day we entered the market. We are delighted to share our love for sports cars with you, and to continue expanding our community of like-minded Porsche enthusiasts.”

The five-floor Porsche Centre Shenzhen Longhua covers an area of 7,347 square metres, with a total construction area of 19,895 square metres. As one of China’s largest category-four Porsche centres, Porsche Centre Shenzhen Longhua offers a wide range of sales and aftersales services, including a showroom, repair centre, and body paint services. It is also notable for the multiple rapid-charging poles installed on-site; these are compatible with Porsche’s all-electric Taycan model, which launched in 2019, and can charge a car up to 80% of its battery capacity within half an hour.

Porsche Centre Shenzhen Longhua has adopted several industry-leading digital technology solutions. For example, the centre is equipped with an intelligent asset management system that utilises wireless connection, Bluetooth and infrared rays to track every customer’s vehicle entering the park via a patented algorithm. Once implemented, this algorithm enables the team to respond to customers’ needs swiftly and intuitively. Its first-floor showroom is equipped with a seamless screen that is equivalent in size to approximately 16 55-inch LED screens; as the largest screen in all China’s Porsche centres, this provides the ultimate visual experience for customers.

The new centre was meticulously planned to adopt a low-carbon design with comprehensive consideration of energy-saving and environmental conservation measures. The entire building utilises an energy-saving LED lighting system; the centre also features a hanging garden that provides pleasant natural greenery, even during Southern China’s autumn and winter seasons.

Jebsen Motors strives to provide services that exceed customer expectations, and a specific talent development programme has enabled the company to become one of the industry’s most respected organisations. Great effort was invested in selecting the most suitable talent for the new centre and as of late March 2021, the centre’s elite workforce consists of 72 employees, including 14 technicians ((with one Gold and one Bronze Certified Porsche Technician) and 14 sales consultants. The Porsche centre also welcomes 15 highly experienced team members who are veterans of Jebsen’s other Porsche Centres.

Since 2015, China has been the world’s largest single market for Porsche for six consecutive years, and in 2020, Porsche delivered 88,968 cars, up 3% year-on-year. Jebsen Motors – one of Porsche’s largest global dealer group partners, has represented the brand across Greater China for 66 years, and enjoyed strong overall sales in recent years. Jebsen was recognised for its stellar sales performance throughout 2020, delivering a total of 10,139 cars, servicing over 100,000 customers across its network of workshops.